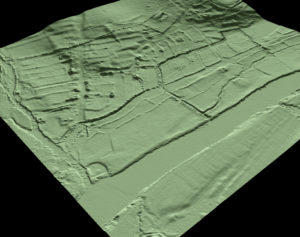 Jerpoint Park is privileged to host a  Monument of notable importance: The Lost Town of Newtown Jerpoint.

It was founded by either Earl Marshall or Griffin Fitzwilliam in 12th century, just west of the Cistercian Abbey, where the main crossing of the River Nore was formed by a tole paying bridge.

It was a vibrant town, with approx 27 dwelling houses, a court house, woollen mill, a tannery, a brewery and reputed to have had 14 taverns. It was powered by two water wheels working on the little Arrigle River and a tower house stood near the market place, where a wealthy merchant would have lived. 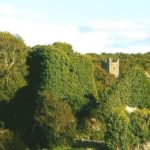 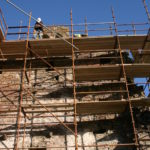 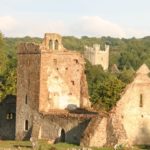 In 2012 the mammoth task of removing the centuries of growth of ivy for St. Nicholas’s Church started & in 2013 the Conservation and Stabilisation took place with funding from The Heritage Council of Ireland.

The structure of the Church of St. Nicholas took a completely different look and feel and so much came into view.

Traveling further up East-West Street, St. Nicholas’s Church and graveyard are situated over looking the town, where the earthly remains of St. Nicholas ( Bishop of Myra)  lay a unique feature of this church is the rood-screen which dates from the 15th century; this is the gallery-like construction running across the church between the nave and the chancel. It was used to support a missive reconstruction of the crucifixion, while the floored area above could also have been used for religious plays and choirs. The final phase was the construction of a small tower over the rood-screen itself, which served as the priest’s residence.

The Heritage Council of Ireland has published a Heritage Conservation Plan about Newtown Jerpoint that you can download directly from the here.